The Air Force taught my father how to program computers way back in 1964, when computers were loud, hot, monstrous pieces of machinery that filled entire rooms. Already a brilliant engineer, he took his newfound computer skills to Texas Instruments and then NASA’s Jet Propulsion Laboratory, where he was part of the team that designed a sensitive seismic measurement package that went to the moon with Apollo 11.

I loved my father very much, but growing up, I’ll admit I was a little intimidated by him intellectually. I’m not the biggest moron in the world, but let’s face it, designing spaceship components was never really in the cards for me. My old man liked calculus and trigonometry and he went out of his way to teach me how to appreciate the beauty of math while I was still in primary school — usually against my will. (He also taught me my first guitar chord, which was “G,” and introduced me to the Beatles, and for those two things alone I’ll be eternally grateful.)

In the 1980s, my father started a computer store, selling IBM clones for home and business use. It wasn’t a huge success and eventually closed. At the time, he also started selling his own software; including a file encryption application, an image viewer and a Reverse Polish Notation calculator. He distributed this software online, under a revolutionary new distribution model called “shareware.”

Shareware was, and still is probably, a sort of limited “honor system” for users interested in using software on their computers. It incorporated limited functionality or time limits to try and incite people into plunking down a few bucks in exchange for an unlocking code for the full-blown program. Today, most professional software companies use a similar scheme. Microsoft, for example, regularly gives away free copies of their office suite to new computer owners for a limited, 30-day trial period.

Just before he died, my father became excited about programming again, because the whole “App Revolution” was starting to open up, in large part because of the popularity of Apple’s iPhone and App Store. Little guys all over the place were making their fortunes programming apps for these new platforms, and my old man was starting to feel right at home again. This above screenshot is the app he wanted to start with.

Some of my readers may not recognize the image above as a slide rule, because it’s round instead of flat. Other readers may not even know what a slide rule is, regardless of its shape, and I can sympathize with that. Briefly: a slide rule is a sort of analog calculator slightly more sophisticated than a “secret decoder ring” you might find in the bottom of a cereal box, with which you might use to compose secret messages.

And now, I suddenly realize that cereal manufacturers may not toss secret decoder rings into their packaging anymore, so this might require a little more explanation.

Okay, if you can, imagine a toy decoder ring like this: the child might spin something that would show the letter “a” in one little window, and the letter “z” in another. A quick, little spin and the letter “b” might be encoded as a “y,” and so on. One letter at a time, then, the child could “translate” her secret message into gibberish and another child could use a similar toy ring to “decode” the message by running the entire process backwards. Anyway, a slide rule works more or less the same way, but instead of encoding the alphabet, it does math.

But see, a two dollar calculator — even a free calculator iPhone app — could certainly do any math you throw at it 5 x 10^9 times faster than the shiniest slide rule. To program a slide rule’s functionality into a digital iPhone app seems like the pinnacle of irreverence. But my father was serious about this. He even applied for a patent.

Perhaps for the novelty alone, he thought this digital slide rule would sell like metaphorical hot cakes. I don’t know if he was right, I tend to doubt it, but I do know that he designed the best (and possibly only) circular digital slide rule the world has ever seen and he was bloody proud of it. And so am I.

Unfortunately, my father died before his magnum opus could be realized. I still have his source code safely archived away along with the web app proof of concept and would like nothing more than to finish his app and present it to the world, for better or worse. But that isn’t likely to happen. Not only am I lousy programmer, I’m not even sure I how to work his stupid slide rule in the first place.

But the dream lives on as a fictitious app for the purpose of an essay. Even better, it gives me a chance to think about the old man again and to remember how grateful I am to be his son.

I miss you dad. 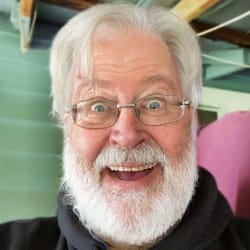 Wallace J. Kelly
Staff writer & critic at Nickel Slick
An adventurer by trade, a lover by choice, Wallace wants to hold a mirror up to society and draw a penis on its face.

Latest posts by Wallace J. Kelly (see all)
Share this:

What do you think? Cancel reply